The Minnesota State Fair is the second biggest fair in the United States only behind Texas. Every year around 2 million people come from all over to join the festivities. There is plenty to eat, see, and do at the fair that someone can easily spend their entire day there.

As far as food goes, we stopped by Sweet Martha’s Cookies and bought a bucket of cookies for a crazy $16, some milkshakes from the dairy stand, had a tater twister or two, a gizmo, french fries, and all the other fair food you could possibly think of.

On the first day, we wanted to make sure we got some cool pictures with the lights from the rides. While taking these by the carousel, a guy noticed me holding lights and told me Merry Christmas and I wished him a Happy New Year. So, an early seasons greetings to you all!

From there, we went to the Midway where the majority of the amusement park rides are. It was a bit of a rainy and cool day so we stayed warm by wearing sweaters and jeans, and dry from the rain with our umbrella and rain coat.

We stopped by the Giant Ferris Wheel which is new to the fair this year.

We ended night one at the fair by dancing to rock covers with a bunch of tipsy 40-50 year olds to the band Uncle Chunk. This was probably the highlight of our night because they were playing some really good 90’s throwbacks. Here’s me enjoying the music by doing an air guitar 🙂

Night two started out with warmer weather and shorter hair (for me). I went with my friends Megan and Dominic and unsurprisingly we took some more photos wherever the lights caught our eye.

The group Pentatonix was performing at the Grand Stand this night and at the end of their performance they had a firework show. Lucky for us, we were over by the Giant Ferris Wheel when they went off; that gave us a great view of all the lights together.

And here is the rarely seen Ghost of Megan below, and our reaction is just as frightening…

The state fair goes until Labor Day, so check it out while you can!

2 thoughts on “The Minnesota State Fair”

On the Subject of Me 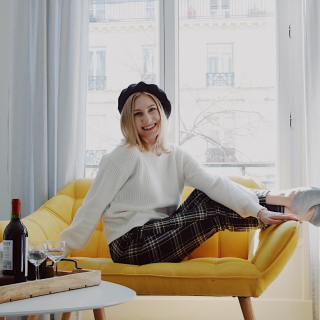 I'm a full-time college student who is seeing the world one trip at a time ––but on a budget! Join me on my journey, and learn the tips & tricks I have found to make travel affordable. Snag some free resources I created to help you get started under Free Travel Tools.